Russell and Rhonda head back to the east coast exploring the new Savannah Way and encountering the unpredictable weather of the far north. 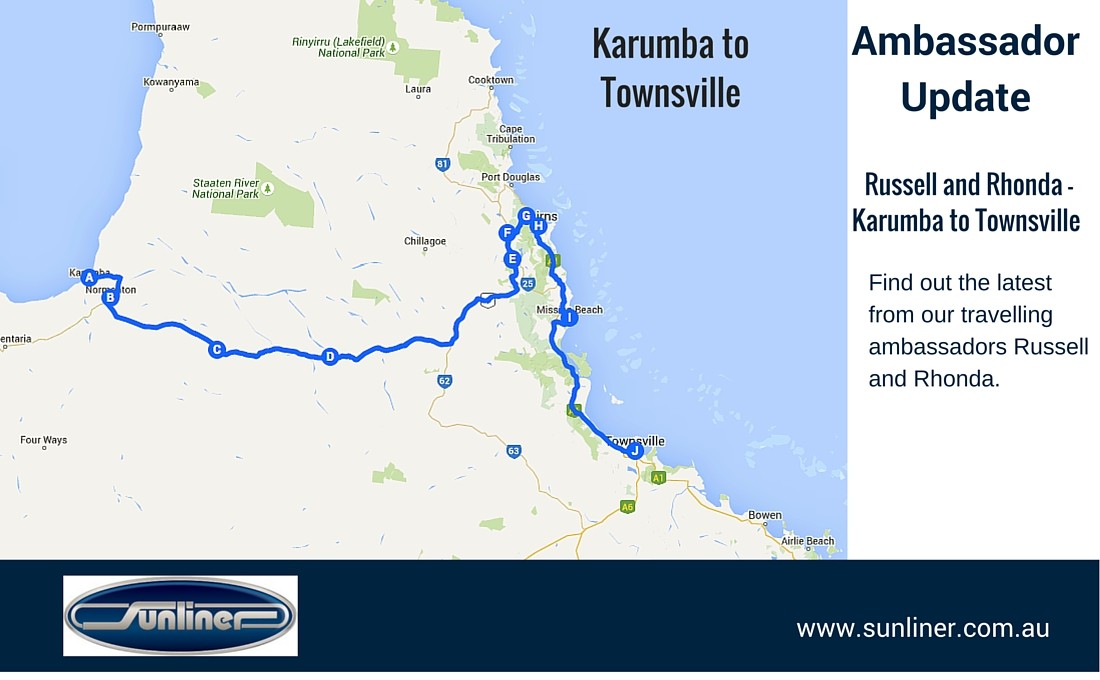 We have spent a lovely relaxing week at Karumba. We enjoyed a meal or two at the Karumba Point Tavern.  The Fish’n’Chip shop near the tavern is also a great option. The market on Sunday is also popular.  The highlight of this spot is the sunsets, which to our mind are reminiscent of the sunsets in Darwin.   If you’re into fishing Karumba is a great place to visit. If you are not lucky catching your own there is also a Barramundi breeding facility that is worth a visit!

From Karumba it was back to Normanton where you can take trip on the Gulflander railway from Normanton to Croydon, which unfortunately only operates on specific days and was not operating on the days we were there, so it was onto the Savannah Way towards Cairns, after a stop over at Croydon and Mt Surprise and an overnight stop at Georgetown.

Whilst travelling on the development road (Savannah Way) is an interesting experience it needs to be driven with care, especially when other vehicles are approaching.

We stopped overnight in Atherton and then onto Mareeba and following a visit to Coffee Works, which is well worth a visit. We stopped at Kaunda for a look around the shops. Finally it was off down the mountain to Cairns with stop at the scenic viewing point for a view of Cairns and the Coral Sea.

We arrived in Cairns and booked into Sunland Caravan Park, which was to be our base for a week.

Unfortunately the weather was not kind to us for our stay in Cairns and we were unable to go out to the reef and had to entertain ourselves with a trip up to Port Douglas for the Sunday Market, we also visited Palm Cove, Yorkeys Knob. For military buffs we can recommend a visit to the Australian Artillery and Armoured Museum. This is a privately owned collection put together by a local businessman showcasing tanks and artillery used by the Australian Army and around the World. For an extra treat you can also have a ride in an APC (Armoured Personal Carrier).

We did not take the rail trip up to Kuranda with a return trip on the Skyrail over the rain forest, as we had done it before on a previous trip to Cairns, we would however recommend that you do experience it when in Cairns.

From Cairns it was onto Mission Beach for another one week stay. One of delights of Mission Beach is the variety of fantastic restaurants, so save some room for a few nights out. We enjoyed some great walks along the beach, which countered the dinners out! Watching the numerous adventurers parachuting and landing on the beach had us almost thinking about having a go, that thought lasted about 30 milliseconds, as could not see any reason to jump out of a perfectly good aeroplane!

Another tip is a visit to Charley’s Chocolate Farm where they are growing Cocoa and making their own premium single origin chocolate and have plans to open a chocolate shop similar to those at Margaret River & Yarra Valley.

A tour of the Sugar Mill at Tully, which holds the record for the most rainfall, was ironically a wash out. The tour was cancelled due heavy rain. We did however visit the Sugar industry museum at Mourilyan to learn about the transformation of sugar cane which you see growing everywhere into sugar and is not to be missed.

Back out on the road and onto the final leg of this section of our journey and onto Townsville. The only caravan park that had a vacancy was the Town and Country Park. We soon found out why the park had room for one more. The park is next to the show grounds and the show happened to be on at the time with fireworks every night and close to the park were amusement rides which were operating until 11pm every night with all the screaming that goes with the rides it was very noisy.

A visit to the Townsville Tropical Museum is also worthwhile, as is a Walk along the Strand.

Townsville has a magnificent Army Museum at Jezzine Barracks, which is in the old Army Units Reserve Barracks and should not be missed as they have an excellent display from the Boar War to present day conflicts. After a visit to the museum a walk up Kissing Point Fort Complex, which has and excellent interpretation on the Battle of the Coral Sea, the Maritime Museum also has a great display on the Battle of the Coral Sea.

No trip to Townsville would be complete without a drive up Castle Hill lookout for breathtaking view of the Townsville and surrounding area, but be warned its not for the faint hearted.

Till next time safe travels everyone.