Follow the journey of Sunliner Ambassadors, Russell and Rhonda, from Darwin to Karumba. 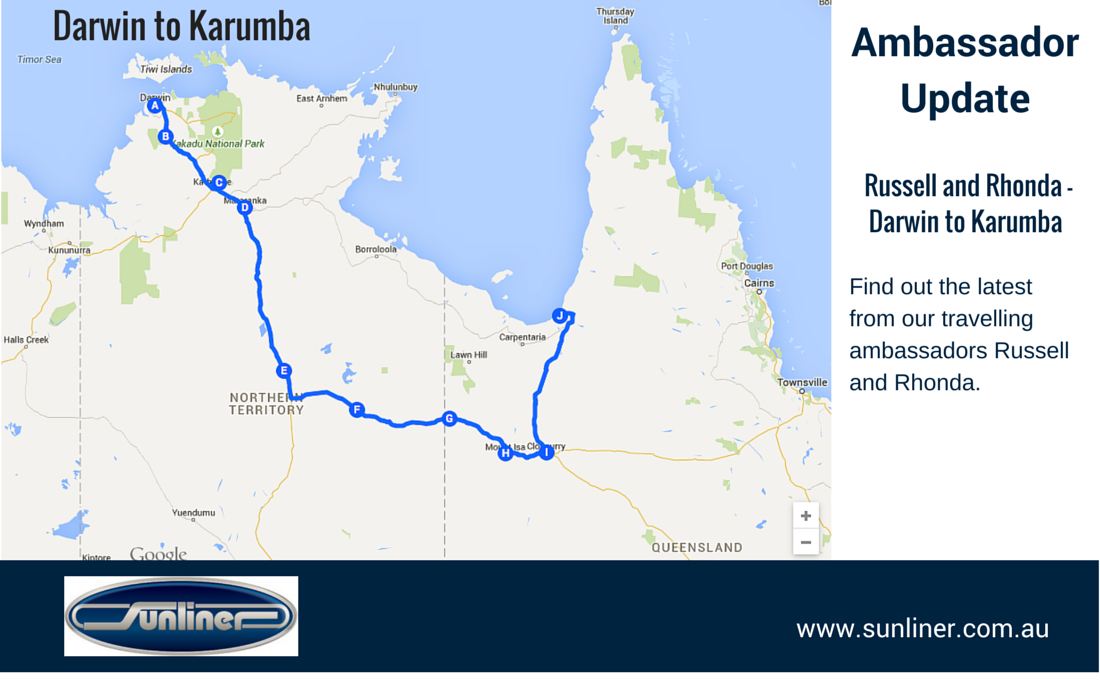 Upon leaving Darwin we started our journey South down the Stuart Hwy dropping into Pine Creek for a comfort stop and then continued onto Adelaide River some 112 k’s from Darwin.

We stopped by the War Cemetery where the service men and women killed during the bombing of Darwin in February 1942 are buried, as well as the staff from the Darwin Post who were killed in the bombing.  I must say is extremely well cared for and they have an audiovisual display at the caretakers residence.  We have visited the cemetery on several occasions over the years and have always felt very moved by the atmosphere there.

We then booked into the Adelaide River Inn caravan park for the night and then visited the 303 bar at the inn for a couple of ales and a meal, anyone who has seen the first Crocodile Dundee movie will remember Charlie the water Buffalo who is now resident at 303 bar.

During our stay at the Inn we got chatting with Lizzie a 76 year old women from Mt Eliza who was cycling from Darwin to Perth on her own, whilst her husband was travelling around Europe, I only hope that we are that fit and adventurous at her age.

We spent a lovely morning visiting the local craft market that in the reserve opposite the Inn and a poke around the Railway Heritage Precinct. Then it was back on the road to Katherine where we refueled at $1.329/L and then out to Nitmiluk (Katherine) Gorge. We booked into the caravan park and booked our tour on the Nit Nit Dreaming 2 Gorge Tour, which we had not been on since 1977. Although we did not expect it to be much different, we have to say they have improved the tracks between the gorges quite considerably since that time.

The sites in the caravan park, which are not grassed, are very good as are the facilities and if you wish you can have a meal at the pool, which had a very good menu.

After a couple of days at the gorge it was onto Mataranka Homestead Caravan Park. Located only a 50 meter walk from the thermal pools, they had excellent meals at the bar every night with entertainment. Also at the Homestead is a replica of the Elsey Homestead used in the 1982 filming of “We of the Never Never” based on the book of Jeannie Gunn.

After checking out of the caravan park, went into Mataranka to refuel at $1.409/L after a 5-cent discount, (as park guest you received a 5 cent discount on fuel at the United fuel station).

It was off to down the track again to an over night stop at Banka Banka Station  72 k’s North of Tennant Creek. Whilst at Banka Banka station I venture up Mt Banka Banka, which had a very interesting sign stating that it was above sea level, another example of the Territory sense of humour!

In the morning it was onto Tennant Creek to restock the fridge and refuel at the BP Service Station as they offer a discount to Seniors card holders, also they are 20 cents cheaper than the Three Ways Roadhouse. Then back to the Barkly Hwy and onto the Barkly Homestead Roadhouse for another over night stop.

We continued along the Barkly and crossed over the border into Queensland and another overnight stop at Camooweal. In the morning we refueled at the service station at $1.709 /L, then continued onto Mt Isa.

The Mt Isa visitor information centre has an excellent museum as well as an underground mine tour which was unfortunately booked out for a couple of days.

The following morning we continued our trip along the Barkly Hwy and we had to travel in rain, which we had not experienced since leaving Whyalla. We arrived at Cloncurry only to find that the town was closed for the annual Show.   Turning left we headed North again up the Burke Developmental Road with a short stop at the Burke and Wills Roadhouse, we continued on and had an over night stop at roadside site 39 k’s south of Normanton where we refueled at $1.599/L.  With a final push we got to Karumba on the Gulf of Carpentaria where we booked into the Gulf Country Caravan Park.

More on Karumba in our next report.

Till next time safe travels everyone.